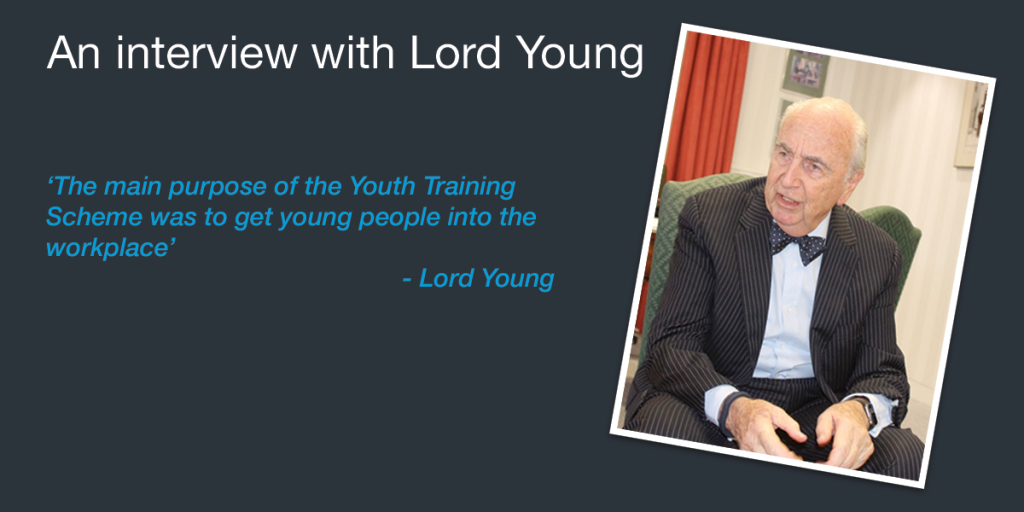 In this, the final part of our interview with Lord Young, he talks to us about what he has done to encourage entrepreneurship in young people. In particular, we look at initiatives such as The Youth Training Scheme, The Small Business Charter and The Enterprise Passport.

Don’t worry if you missed the previous parts of this interview, you can read part one here and part two here.

You were responsible for creating The Youth Training Scheme, what was the idea behind that?

We needed it because too many young people leave education unemployable. I discovered that children who did not enjoy doing maths in the classroom were able to learn all the maths they needed to know in a few days in the workplace. I realised that unless people saw the relevance of what they were doing, they would just switch off. So the main purpose of The Youth Training Scheme was to get young people into the workplace.

30 years later we are facing similar issues with young people. Young people are generally pretty good in primary school and they go out ready to take on the world. However, after the first two years of secondary school about a third switch off. They look out the window, start mucking about and generally don’t see the use of what they are doing. And once they go off that train they never get back on and get bored and demotivated. Around 30 percent leave barely literate or numerate – and convinced that they are failures.

We have done two things about this. Every headteacher has an enterprise adviser, who is going to bring in young entrepreneurs to the schools. Not to talk to sixth forms but to first and second years. We are also going to publish a report which shows that if you don’t do well in maths you are going to earn less for the rest of your life. So many people condemn themselves to the bottom of the barrel and we really need to rescue these people.

You are also responsible for creating The Small Business Charter and The Enterprise Passport. How do these work and what impact they have had?

We have done a lot more than those programs you mentioned. We have done something called Contract Finder, where on one site we put a quarter of a trillion pounds worth of contracts a year – which are public sector contracts –  all local authorities. The idea is more small firms are able to deal and you can see what’s available in your area.

When we started in 2011, if you worked from home you were liable and in breach of planning, and if you sold your house – you had to pay Capital Gains Tax. Now you don’t need planning or anything like that, you can work from home – and over 50% of startups start at home. So that’s something which has helped hugely.

The Enterprise Passport is all part of getting young people more prepared and ready to face the world to come. This scheme records everything you do, whether it’s in an office or a hospice – so that when you leave, an employer can see more about you as a person. It’s going to be in software and the school or pupil won’t be able to touch it. We hope that it will encourage children to take up more outside interests. It will be transformational and change people’s attitudes when they come out of school.

What do you think of the current work experience format in schools?

Really what it consists of is kids watching other people work because legally, they aren’t allowed to work. I think generally there is a lot we can be doing better with this.

Do you think businesses can be doing more with apprenticeships?

Yes, one of the things I brought in was Apprentice Degrees. This will give people a chance to work with a job and a degree without a loan, which will be attractive. We must have a progression in this area.

That’s it for our Lord Young interview. We hope that you enjoyed reading it and found it useful. If you would like to read similar content, take a look at our dedicated small business blog.