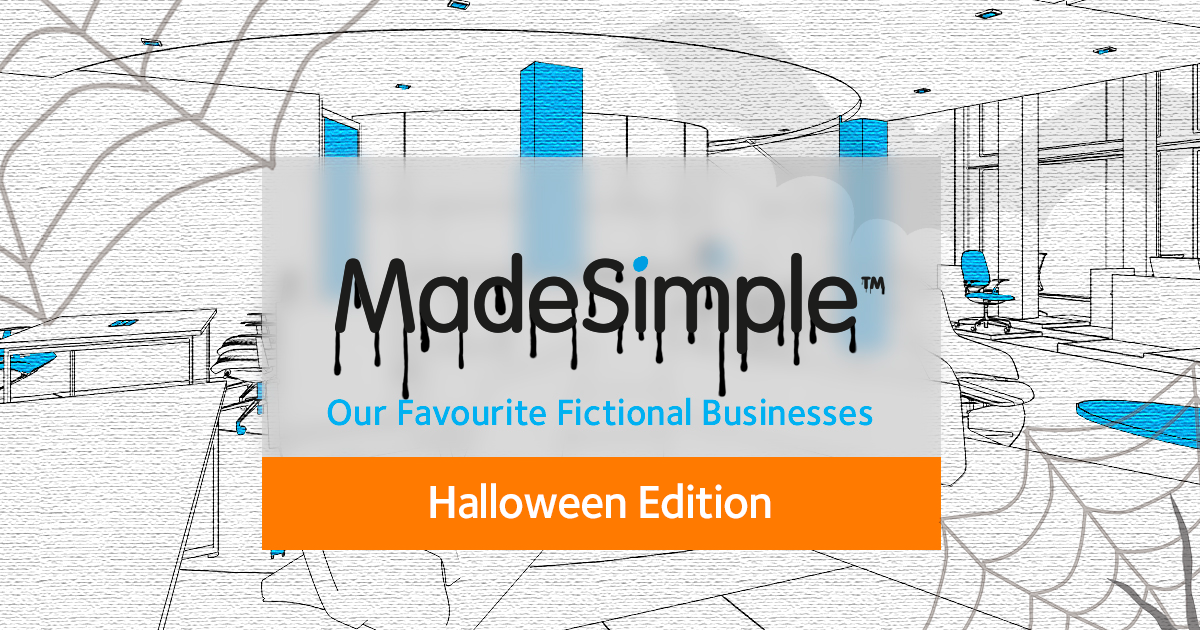 It’s that time of year again, Halloween. It’s the first in a long line of celebrations that take place in the latter months of the year, and to celebrate we thought we would take a look at the top 5 scariest fictional businesses. As usual with our fictional business posts, we’ll be looking at some of the practical business lessons you can learn from these companies.

They might not be real, but the insights and business lessons they impart are. One thing about us is that we try to find business inspiration from many sources, even fictional ones. This is when you form your company with us you have some great tips to help your business grow.

Check out the rest of our fictional business series. We have many on our blog including one related to company culture, another on science fiction and even one dedicated to Duff Beer. So, what are our top 5 scary fictional businesses – and what can we learn from them?

Creepy, Kooky – But With Legit Business Lessons, Our Top 5 Revealed

There are many scary businesses from the world of fiction that we could have chosen, but we’ve chopped it down to only the very best – or perhaps worst in this case. If we’ve missed one you think we should have included, or you want to add some insights of your own, feel free to comment below.

So let’s get cracking!

This company is scary to anyone trying to start a business, because they actually bought up every company in the world and effectively created a global corporation that dominated the planet. Not only this, but in the 2008 Pixar film WALL-E the business actually created so much waste that humanity had to leave earth and live in a spaceship.

Scary stuff. But what can we learn from Buy n’ Large?

Buy n’ Large shows us that although ethics may run wild, and go against brand values, they can be brought round by scrupulous members of an organisation determined to change it for the better.

It’s almost impossible to talk about scary businesses without talking about InGen from the the 1993 film ‘Jurassic Park’. After all, some companies might be evil and scary – but how many actually bring about pre-historic monsters to walk once again on the planet?

But what can InGen teach us?

InGen show us that you should be careful with your abilities and use them responsibly, as well as remember that the technology you believe in should not necessarily be relied on. Over hyping and not delivering is a common problem in business too and perhaps one of the more important lessons that InGen can teach us. A good real life example of this is the catastrophe of the much anticipated London Oktoberfest, which was fraught with problems and cancelled after 1 day.

Most of the scary businesses in our list are from fanciful sources of sci-fi and horror – but the company Initech from the film Office Space is a lot more realistic. A software company, it has many tropes of the modern day office that are perhaps not so scary in terms of pure horror – but can certainly bring about a sense of dread.

Initech can teach us the following:

Initech is the most realistic of the companies on the list. But there are real lessons about avoiding red tape, being fair and allowing a bit of wiggle room for lightheartedness in order to create a more efficient and positive company that employees enjoy working for.

What’s scarier than a ghost? Catching a ghost of course! The Ghostbusters franchise is a film series that focuses on the aptly names ‘Ghostbusters’ formed to exorcise New York of supernatural beings.

But what do they teach us?

It’s quite a business. The Ghostbusters show us that taking advantage of demand, preparing for any hazards that come about and teamwork can deliver an effective product to consumers. Nobody could say that the ghoulish slime creatures of the film aren’t managed properly!

The largest company in the TV series Futurama is known as a MomCorp. A supposedly sweet conglomerate with a figurehead ‘Mom’ that is at the helm of a massive global enterprise delivering robotics, food, weaponry and much more to citizens of New New York in the year 3000.

But what does MomCorp give us in terms of practical business insight:

MomCorp is futuristic and scary. But what it teaches us that listening to junior voices, avoiding those who don’t contribute anything of value and remunerating fairly is of great importance to smooth running business.

We hope you enjoyed our rundown of this special Halloween edition of our fictional business series, and find the insights that can be drawn from them helpful. It’s great fun to impart great business advice, from established companies or those from fiction, so that when you form your company you are all the more prepared.

Thanks for reading. Don’t forget to check out the rest of our blog for more, particularly the ‘Small Business’ section.

By Alex Novakovic at MadeSimple – Follow Alex on Google+